With a 100€ sailboat from Ankaran Slovenia to Krf Greece 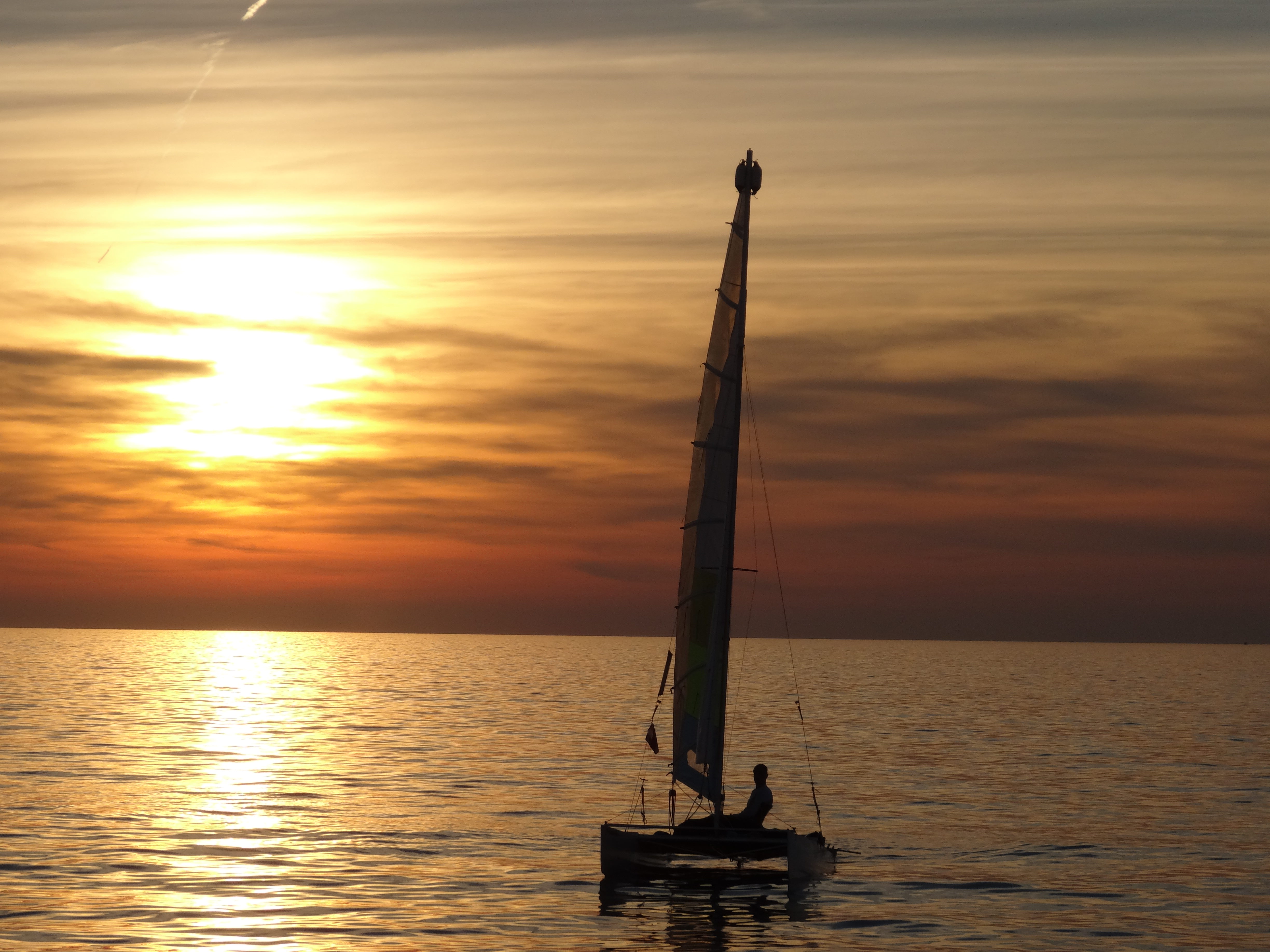 In times when past cruises are counted and new ones are being dreamt of, we take you on an unusual journey which was taken by one Igor Stropnik by traveling along the Adriatic sea all the way to Greece. All of that on a 5,5 meter catamaran. Igor Stropnik is not an unknown name for those who follow sailing with a dose of avanturism or some sort of “alpinism on waves”. This thirty year old professor of kinesiology, a man from Ljubljana with half a family tree from Zagreb, does with the sails something that can be easily compared with climbing on the top of Himalaya – without oxygen bottles on the highest mountain. It’s not that Igor doesn’t like sea company: As a professional crew member he sailed from Palma de Mallorca to Malta. On the route from Panama to Tahiti he crossed the Pacific, and for fun he skippered on The Adriatic, Bahamas, etc… But he did not experience those as a challenge.

FROM NORDKAPP TO NARVIK

Each summer, traditionally, from the time he went with his first laser underneath Velebit and sailed from Novi Vinodolski to Zadar, he takes his own expeditions. In Year 2012, with a small 3,9-meter blow up catamaran he sailed from Nordkapp south to Narvik, then across the Tornetrask lake and Torn river to the Baltic sea and then to Stockholm crossing more than 2500 km in 45 days. In July 2015. He chose the “safest” boat, but the route was moved even more to the North. It was placed in areas around the North Pole and Igors sailing lasted 15 days during which he crossed 1100 miles. One time he sailed with a small catamaran to Dubrovnik and back, the next year he sailed down to Albany… wherever he went it was crazy and unforgettable – only with Greece did he not have any luck up until now. 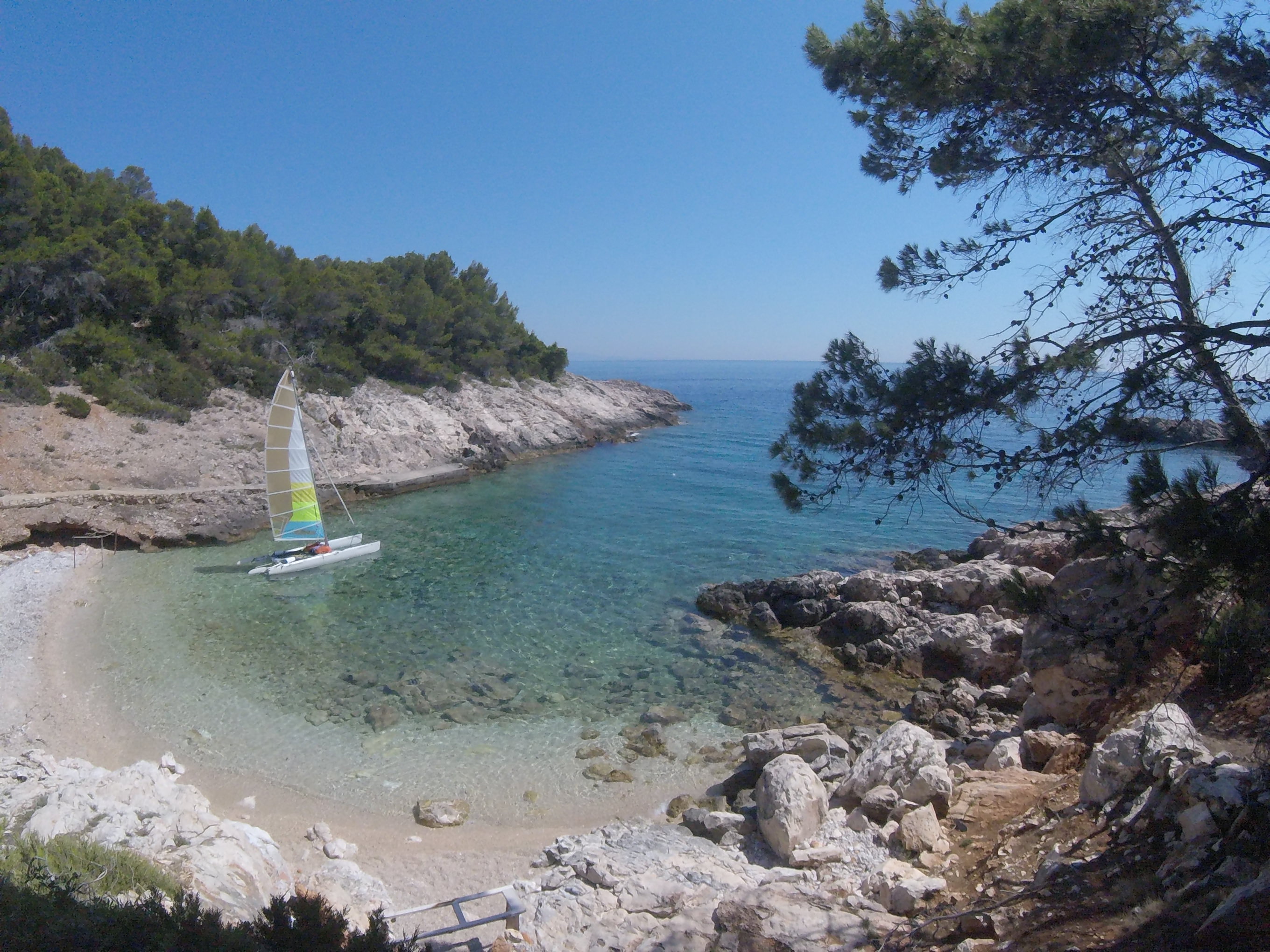 SUCCESS IS ALWAYS HARD TO GET

„I already tried sailing to Greece alone three times – without success. One time there was to little wind, the next time I was caught by a rainy summer, the third time I had a boat that was too small. This summer I decided on going, no matter what, and that only in one direction because it is too hard returning from Greece because of the NW wind” says Igor, who threw the challenge glove into Poseidons face by going on an adventure with a 30 year old catamaran which he bought for a hundred euros.
„This Darta 18 copy (5,5 meters) was in bad condition but I patched it up somehow. And I started…“ he talks by showing the rout which started in the Slovenian Ankaran. He packed the equipment into waterproof bags which are tied to trampolines. Maps and GPS were in the cellphone, the safety blow up kayak was on the net. 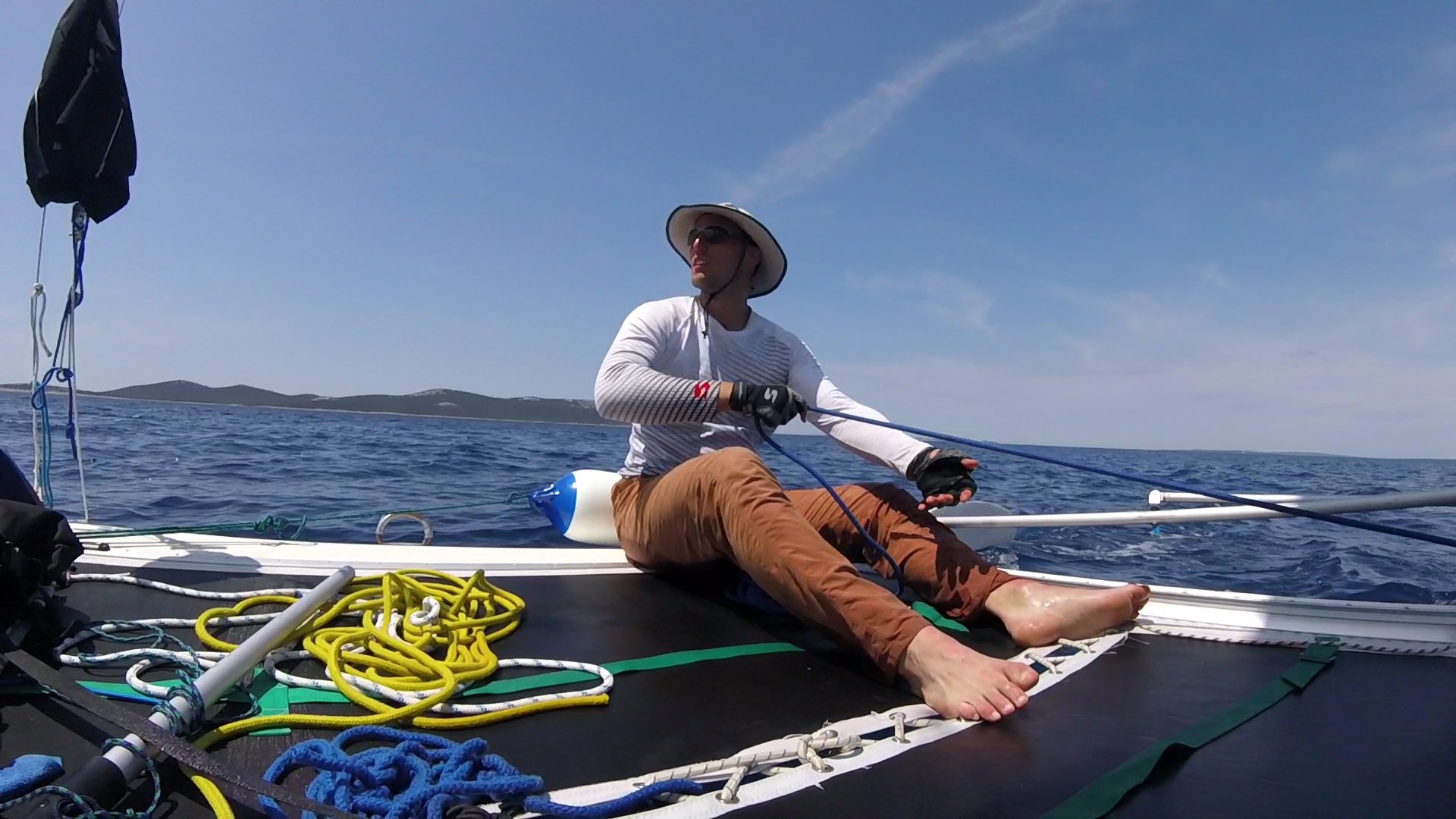 „From Slovenia to Mljet I had pretty low wind, except for a few days of strong Gale but the catamaran is incredibly fast. I needed 12 days to Mljet. I slept in coves on the boat. One time on the anchor, another time along a small mole. During the day I sailed as much as I could because that was my favourite! In the evening I would eat on the anchor spaghetti with tuna and ketchup. During the day I nibbled on cookies, ate Sardines and was catching the wind. On Mljet I looked at the weather forecast, they were announcing strong NW wind. I used it with a two times shortened main sail and arrived at The Otrant gate in 15 hours. The wind was stronger than 20 knots and the average speed during the night was more than 12 knots. In the open, from so much wind are usually large waves made on which you can surf crazy! Luckily, it was a full moon so I saw pretty well in front of me. If you are not concentrated on the Catamaran, you can easily make a salto over the Prow. Around me no one: a few ships and a sail boat which was going to italy” he says and adds that his navigation was as with the old greeks’!

Touch screen was not working because everything was wet, on the compass he saw nothing because it was too small and placed too far. During the day he sailed under clouds, during the night he managed to follow the stars.
„When the North star appeared, everything was easier. Holding an angle Towards her, in the morning I was in Otrant, 15 nautical miles from Albany. And that sailing was awesome, pure fun, that is until I came about five hours sailing from Krf”, he says and pats himself on the forehead. 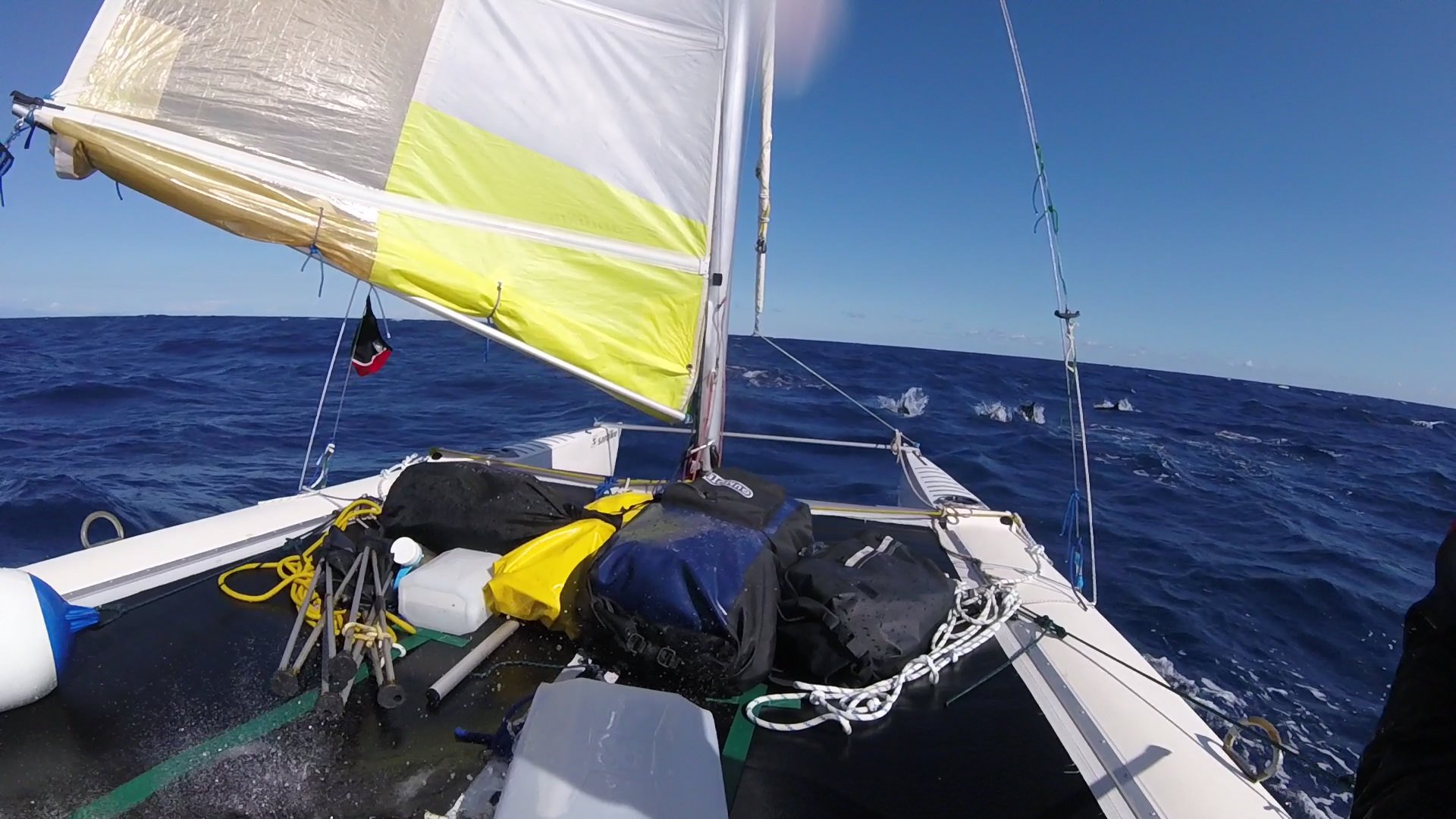 „I notice, one steer hangs unusually on the stern. From the string force of gliding last night, the Screws which hold the bearer of the steer had unscrewed. On Land, it is a joke but on the open sea it can not be fixed. There are also two holes in the stern which these unfortunate Screws opened and now the water is entering my Hull. In it is at lest 50 liters already. I thought that Greece was a bust this time as well, unless those dolphins that followed me the other night aren’t a sign that someone above is helping me. It is not such a big deal if I don’t make it to Greece, but will I be able to even reach the land?” He thought and then in the dark, on the waves, patched the holes up with epoxy.
I was not sure if that was going to work, when actually, it dried under the water – and held! The situation was a little better but inside my hulls, I definitely had 50 l water plus Styropor and Purpen. I filled that in at home so that I do not sink. The wind fell a little, Italy was up wind, and I do not wish to go to Albany. Never the less I do not give up on Greece! I have been sailing an entire day and night already and it affects my mentality. I did not eat- when you glide all the time it is hard to take out biscuits, and the moment I take them out they get wet. They say that a man is made 60 % out of water. At that time My percentage was 100% Salt water! He jokes and criticizes himself adding how he had to take the drysuit he had in Scandinavia. With it it would be more simple. But in this way it was more challenging, especially when the jib halyard broke (of the front sail).

„What will I do? I raise up the Jib with the main sail halyard. The other steer looks fine but with the speed of a few knots I will never reach Greece. I take a risk and prepare to raise the main Sail. It was heavy but when I put it together the wind brought me the halyard. I cannot take it because the wind is too strong. Without additional help? And then I realize that the healthy hull drank some water. The Stern is under the sea. I float under Albany, and she sends me from the coast a katabatic wind (a wind caused by the movement of air down the mountain). It is strong and cold as Gale. It blows crazy, I hook onto the ship with my legs, hang and sail only on my mast” he says. It saved him that his hulls were full of water. Until then they drank more than 100liters of water and that held him together with the boat on the surface. This duel lasted for an hour, the wind blows him to the open sea, Krf is getting more far … 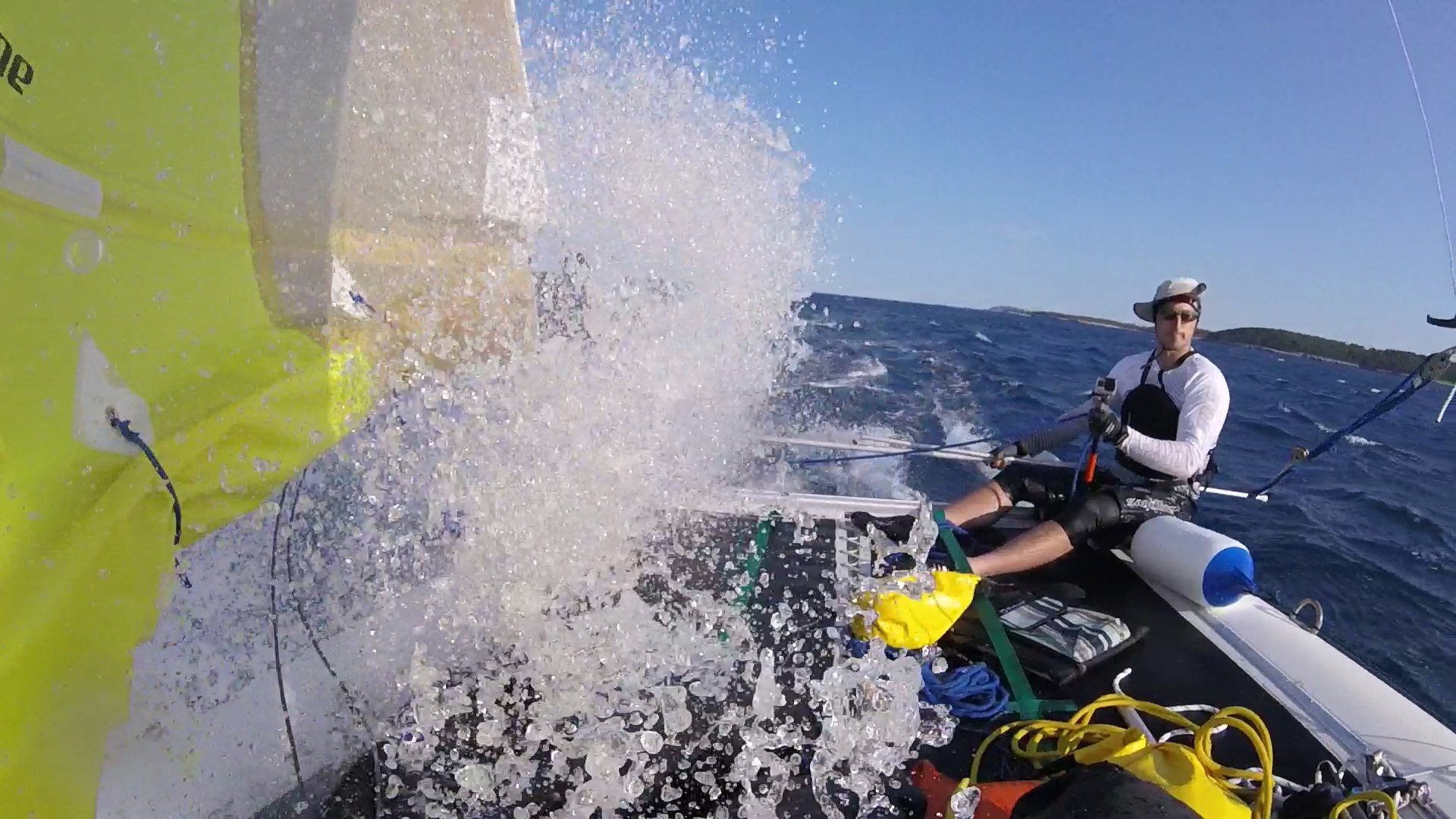 „Once the wind calmed down (it lowered to around 30 knots) I managed to throw a rope across the mast cross and than half way raise the jib up. The ship is full of water and awfully heavy, slow but at least I am moving a little bit closer to Krf. The wind started to blow stronger again but just as I was about to reach Krf it died down. Nothing but calm sea.
„It was two in the morning already. I was tired, shaking and mentally crazy. I curl up into the neoprene blanket and realize the best thing is to stop complaining and fall asleep. “ he says. Two hours later, when he woke up “I was all better, and there was a wind coming, perfect for him to reach two nautical miles to Krf, but then the wind stopped again”. 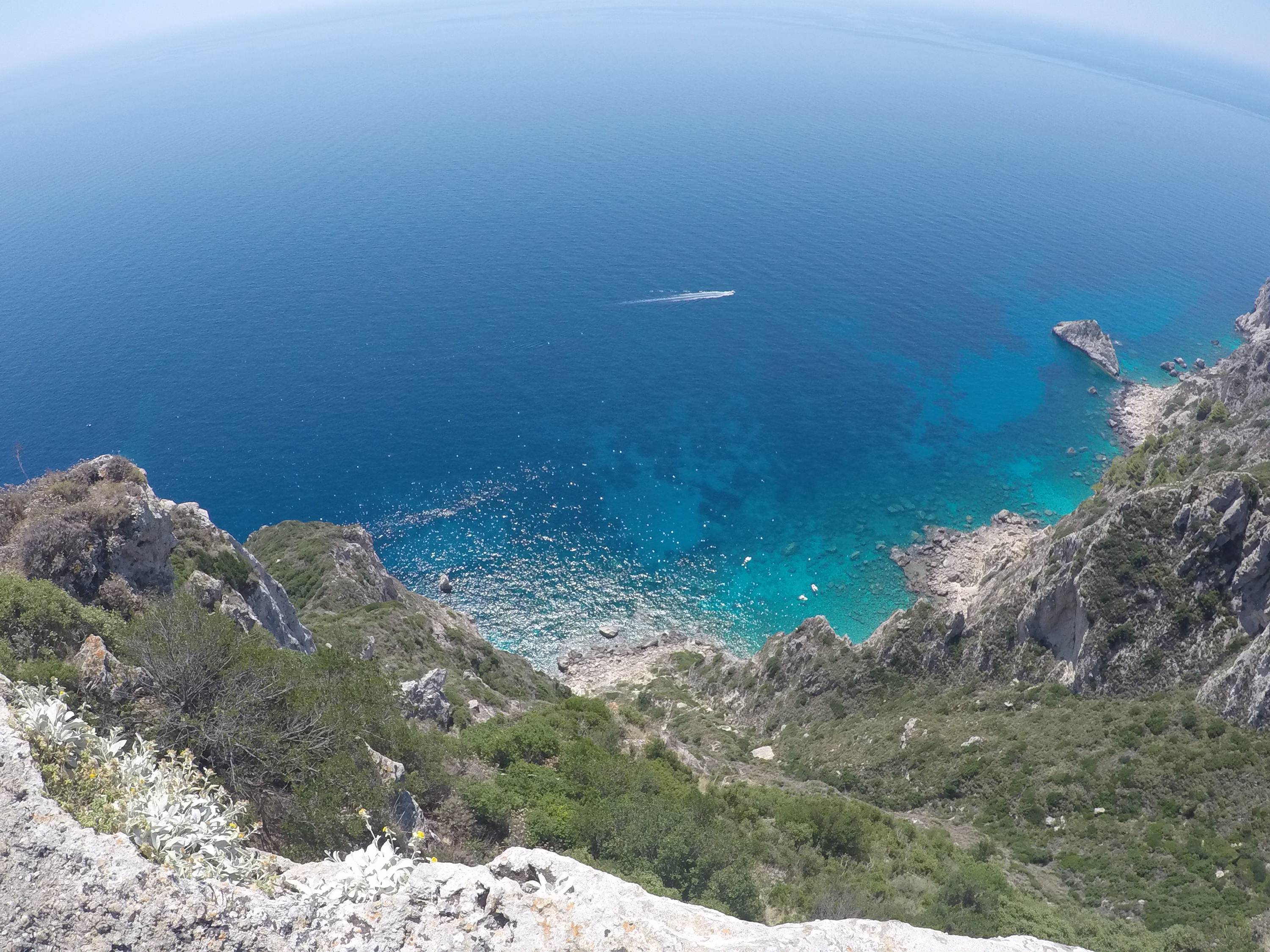 „I do not have the strength for rowing , I wait for the morning and then slowly, arrive to a sand beach. I pull the catamaran up and lay on the trampolines. The entire next day I eat and sleep. Instead of 20 hours sailing from Mljet, in the end it took me 48 hours but I am in Greece! Almost 1000 miles in 14 days from Ankaran to Krf. I pull the boat up from the beach and take off my equipment. I was sightseeing Krf for two days and then board everything on a ferry and direction – Venice” he laughs and then shows us the video to confirm what we just heard. „These GoPro Cameras are getting better and better. You press one button, the rest of it she makes. You out it on a few spots to have more angles, mix it up on your Computer and voila theres the movie. Simple. And which is the next game with wind? 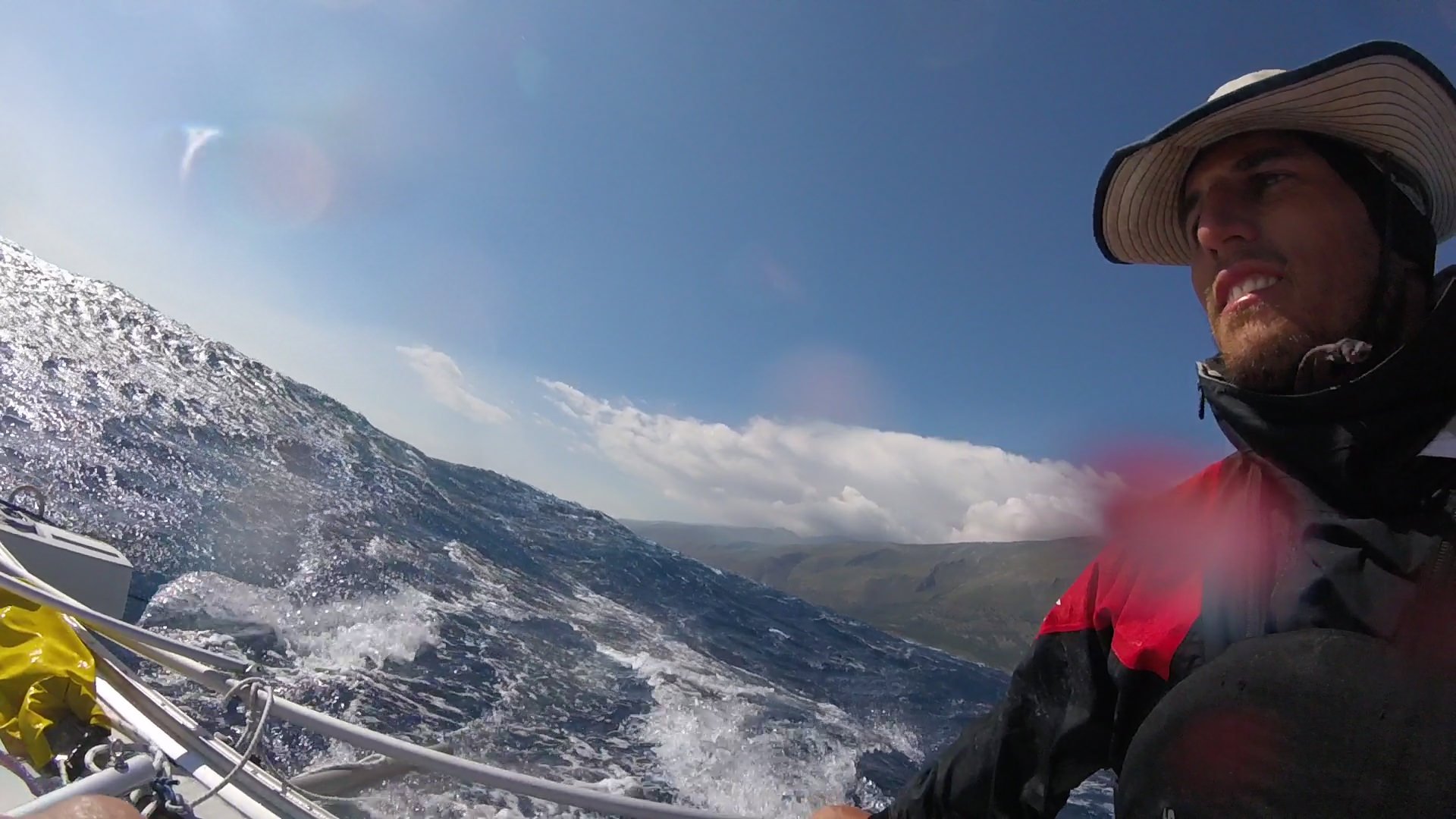 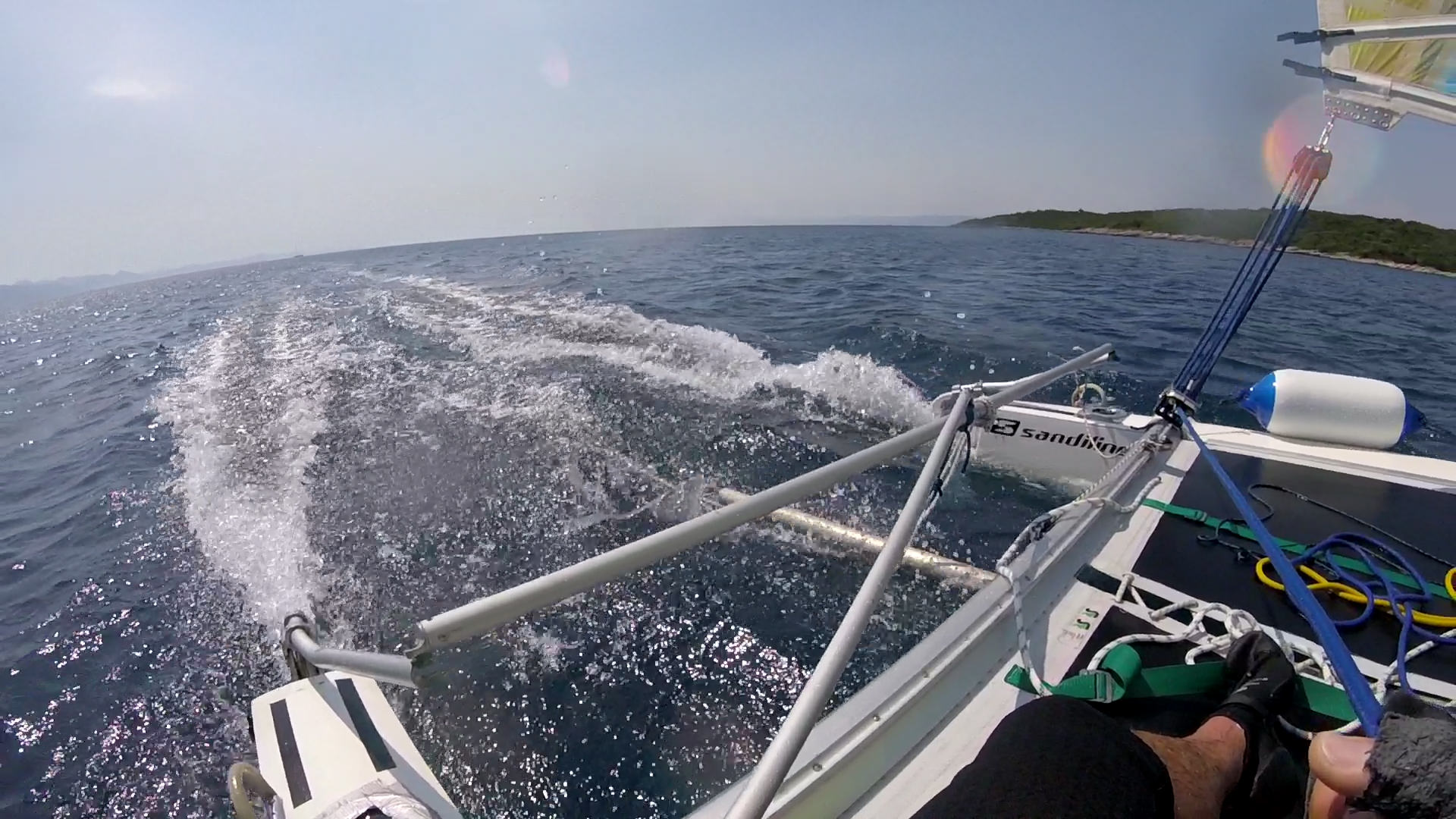 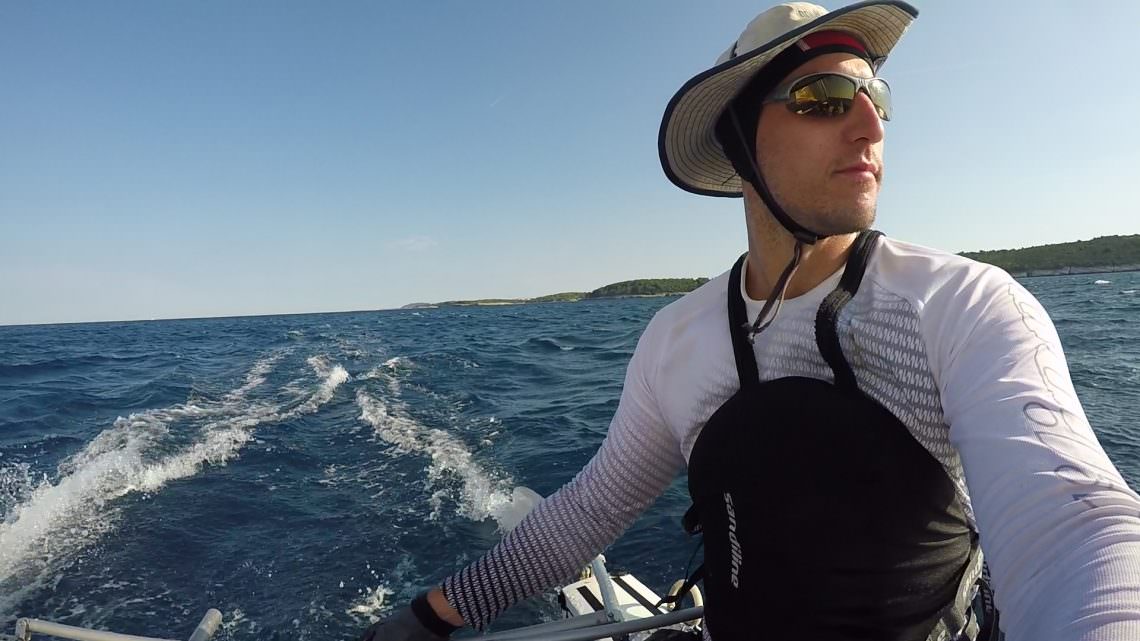 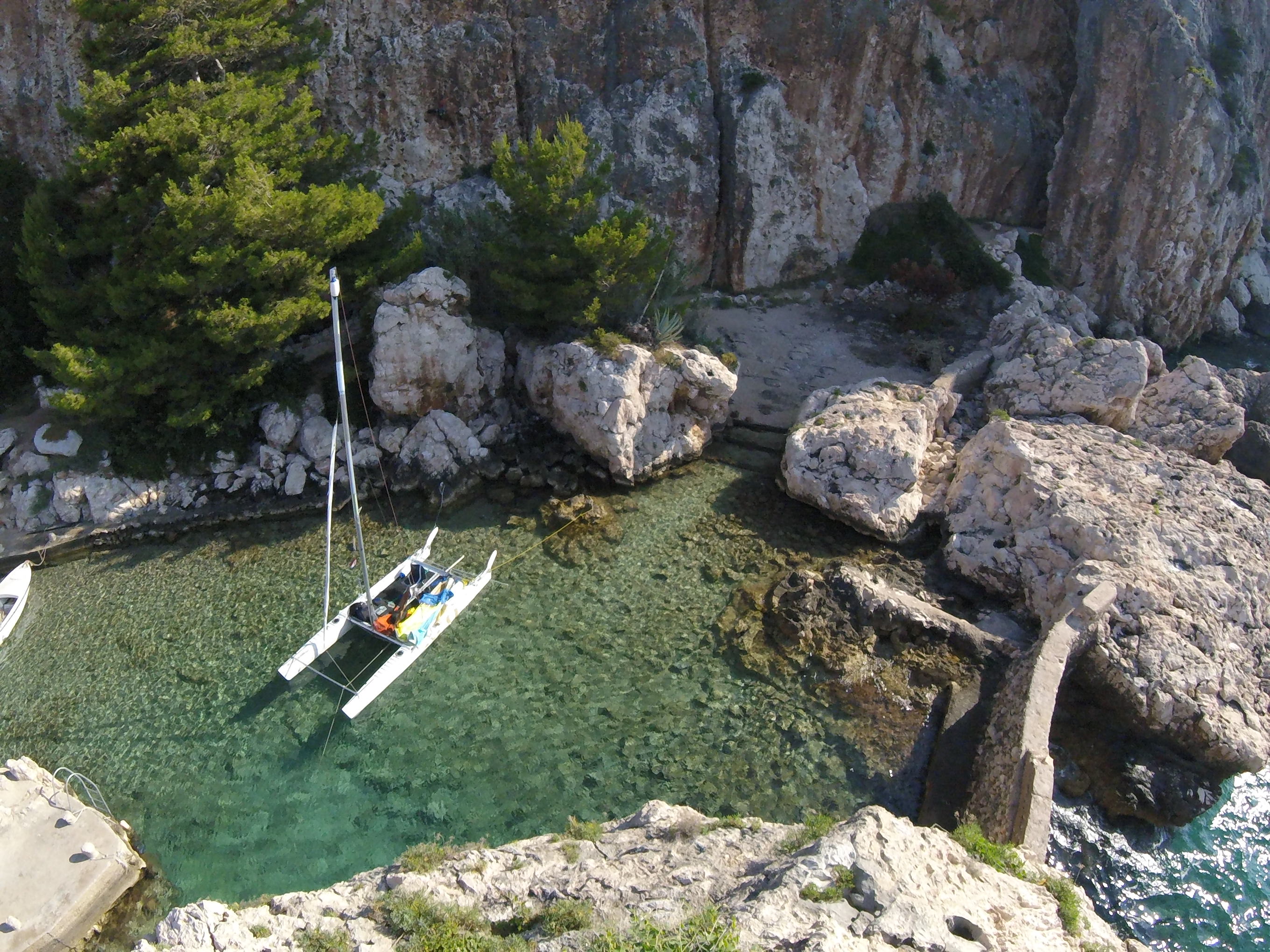